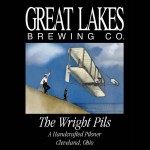 A true, classic, flavorful craft pilsner? In America? It’s so crazy, it just might work. When Ohio’s own Wright Brothers invented and built the world’s first successful controlled airplane, we’re willing to bet that they had their share of disbelievers. But just like the brothers Wright, we’ve set forth to change perceptions and broaden horizons. Is a finely crafted pilsner as impressive as Orville and Wilbur’s contributions to modern aviation? Probably not. But it tastes really good. And as a sessionable brew, it’s perfectly suited for multiple test flights. So let’s toast to blue skies, a full glass, and a smooth landing.